The Time to Trust?

Brands, companies and politicians are in a trust economy. Whether you're staying in a hotel, buying a new hair straightener, grilling on your new grill, or voting for your United States Representative, there is an element of trust at play.

Advertising and trust have gone hand in hand for generations, with the assumption that you can believe what you're seeing. However, advertising legislation has made it clear that there are sometimes untrustworthy elements to advertising. The Federal Trade Commission, the Food and Drug Administration, and the National Institute of Health all play a large role in regulating the advertising that you see daily, and there's a reason behind that: consumer mistrust. Even today, there is legislation proposed that will make all pharmaceutical ads responsible for displaying the list price of their drugs in hopes of garnering more transparency.

Being a “digital native,” I’ve always thought that I was keen to see through the deceptive ads that flood Americans around election season. But today, after seeing a smear ad against Abby Finkenauer on YouTube, I realized I had been duped—and not in the way I expected.

The ad in question uses all the elements we've come to expect in an attack ad: harsh language, intense music and diced together quotes. The spot ran for 15-seconds, and apparently doesn’t require the boiler plate stating who paid for the ad. The 30 second spot is show below. 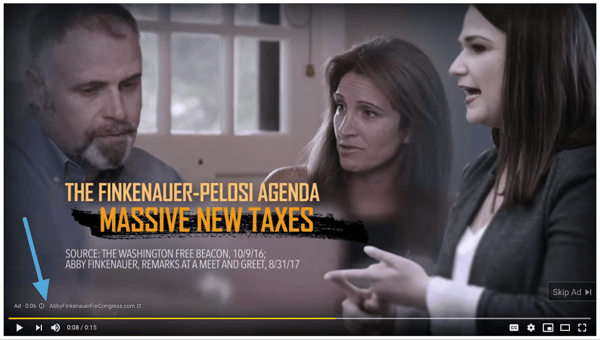 The trick is in the URL.

YouTube, in an attempt to increase transparency since the 2016 election, now includes a URL for  advertisements like this. In this case, the attack ad sends you to AbbyFinkenauerForCongress.com.

Initially, I suspected that the ad was using the real URL for Abby’s campaign to gain credibility, even if a user was confused when they were directed to the official campaign page. But after clicking the link myself, I saw that the website was actually owned and operated by the Congressional Leadership Fund (a Republican Super-PAC closely aligned with Speaker of the House Paul Ryan)—not Finkenauer's campaign.

Domains are a cheap way for politicians (and in turn, brands) to instantly gain credibility. I don’t want to sound jaded...but we now have ANOTHER thing to be on the lookout for.

Websites were once difficult and costly to build—not that long ago, it would have been too time intensive to create a whole website around a single commercial. So the mindset was “Oh, if they have a website, they’re legitimate.” But now we live in the days of templated sites that can be created in minutes and boosted by advertising dollars to gain traffic. I would never condone requiring a legal element to purchasing a domain, BUT this tactic may start that conversation for lawmakers.

What should consumers take away from all this?

This is all a friendly reminder to follow the sources you see in ads. Understanding the context behind the ad is important. Don’t trust a brand just because they have a website with a legit-sounding URL,. Do your research and trust your gut. (Unless your gut is a little gullible...like when it tells me I need another slice of pizza.)

What about brands and marketers?

This campaign follows some steps that we recommend for our clients—like partnering a digital campaign with a landing page that can easily be tracked to gauge effectiveness. It's following best practices...but maybe not in the most sincere ways. Trickery is never a tactic we recommend (unless it's Halloween). But honesty? Transparency? Authenticity? Those go a long way with customers who expect deception and little else.

And if you market yourself genuinely, trust will follow.

Jedi Data Analytics - With great data comes great responsibility. Learn about the ethics of data collection and consumer protection from a marketer's perspective.

Your Customers Are People Too - Advertising is all about psychological manipulation...right? Maybe not. de Novo makes the case for using customer research to connect with customers in a meaningful way that benefits both parties.

Do Marketing and Politics Mix? - It depends. Explore the intersection of marketing and politics through the lens of a controversial Nike campaign.
Previous Post
Next Post