An Apple by Any Other Name

An Apple By Any Other Name…

For the last 16 years Apple has used the now iconic (or for the cynical, clichéd) “i” prefix to clearly identify their products and establish their dominance over the tiresome hordes of their copyright-infringing competitors. Now, to the chagrin of the groaning public everywhere, Apple’s pulled a Prince and reverted to a #!&@$ symbol.

Starting with the iMac in 1998, Apple consistently and predictably branded their products so methodically they explosively upgraded their status to iGod. But lately, so many brands have jumped on the iBrandwagon that Apple seems to be slowly losing their instant recognition, and the prefix has become laughably, though regrettably generic. Just imagine all the iProduct zombies terrorizing Wal-Mart stores across the country, slowly gnawing into Apple’s once unadulterated iBrand integrity.

Still, users have grown so accustomed to the familiar “i” format that eyes everywhere roll whenever calloused brand loyalists are forced to correct your seemingly willful ignorance: “Ahem, you mean the Apple watch?”

So what the hell does this “drastic” change in branding actually come down to? Apple is still synonymous with quality, yes, but it hasn’t been as closely associated with innovation as it was leading up to the death of founder Steve Jobs. Sometimes you can "market" yourself to a better product...but that's not easy.

Is this all just Tim Cook’s attempt at leaving his own legacy?

You also have to wonder after the iCloud security scares if the reversion to Apple branding for their new pay system will allow its users to just forget about that whole breach thing and play with their new shiny toys.

Or maybe all the star-studded fanfare of the reveal was just an attempt to distract buyers from the fact that their over-hyped products, whose eager super-fans camp out to purchase on the first day, aren’t actually offering anything the market hasn’t already seen before (well, at least not from Apple)?

I personally think they’re all just messing with us. But as a wise man from the future once said: 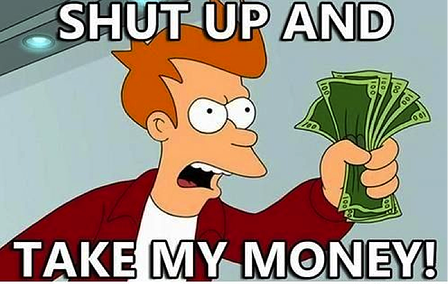