Q&A: Annie & Braden Answer Everything You Want to Know About Vertical Video

It's a familiar scene: you're browsing vids on YouTube when all of a sudden, you chance upon a video that looks something like this: 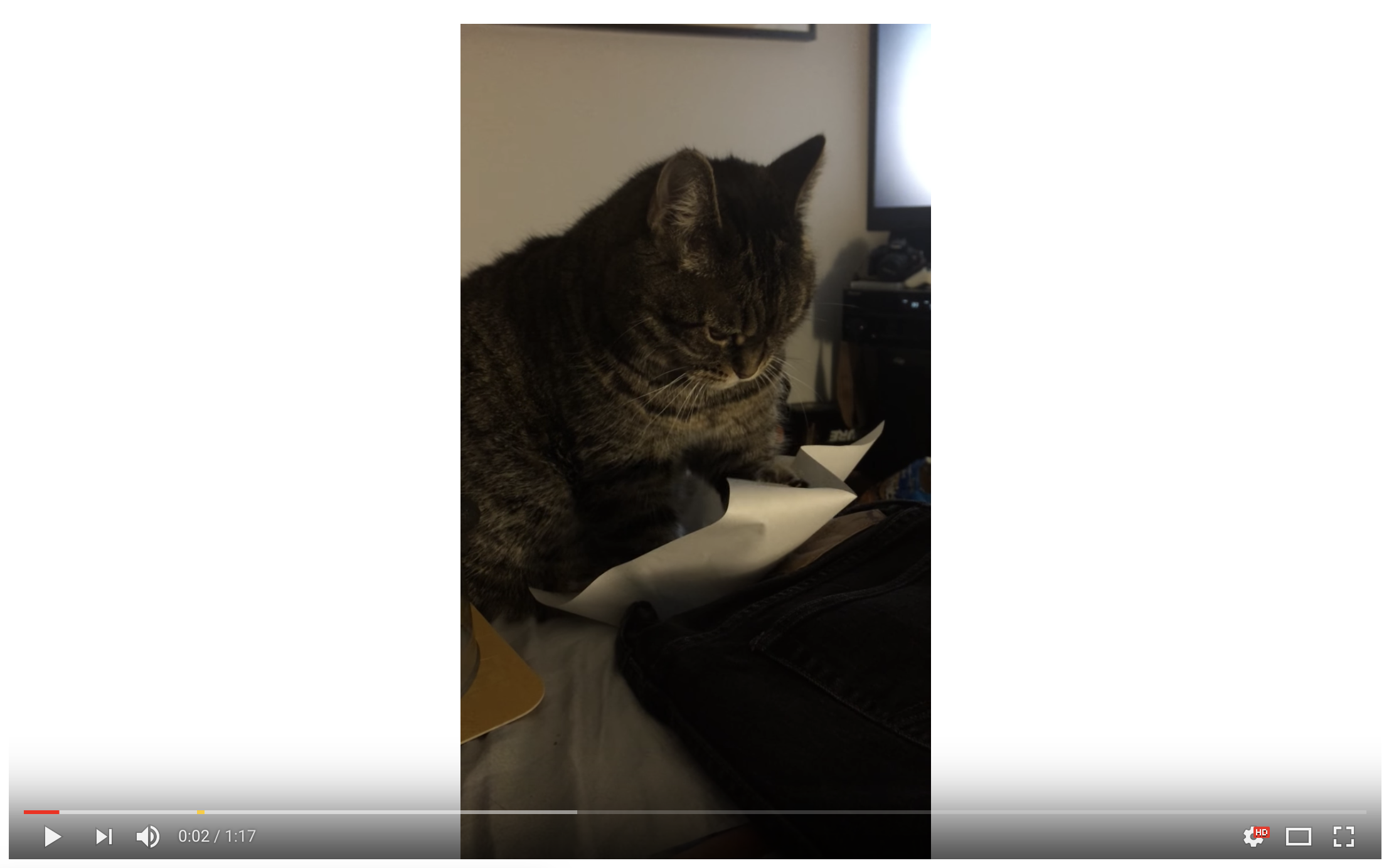 No, the white space isn't a glitch—it's intentional. And no, the video hasn't been cropped. (Rest assured, you're not missing out on any background cat action.) That's because the video you're watching was made to be viewed from your phone's vertical screen.

Because much like Fortnite, 90s sitcom reboots and canned sparkling water—vertical video is here, and it's not going anywhere any time soon.  That means businesses, nonprofits and anyone who relies on digital content to market their products and services will need to get with the picture, pun definitely intended.

To clear a few things up for our fellow marketers, we asked our video team to weigh in on the trending format and answer a few commonly asked questions about vertical video. Here's what we found out:

What exactly is vertical video?

Braden: Simply put, it’s content specifically created to be watched with your phone facing upright—the same way you’re probably holding it as you read this. Think of it as portrait mode rather than landscape. If you’ve seen a viral video taken on a phone, it was probably shot vertically. That's because it’s just awkward to hold your phone sideways to take videos.

Annie: It’s 2018, ya’ll. Everyone and their mother has a smartphone (my mother finally joined the party after 10 years of resistance). Because of their design, holding our smartphones vertically just comes naturally to us. As a result, we tend to consume content in the same manner.

Think of your favorite social apps—Instagram, Snapchat, Facebook. All of them have a “story” feature where users can share vertical photos and vertical video snippets of their day. More recently, businesses have joined the party, sharing ads and content the same way.

Essentially, vertical video is just a natural response to a habit that has already been ingrained in us for a while now.

Vertical video has been around for some time. Why has it taken so long to catch on? 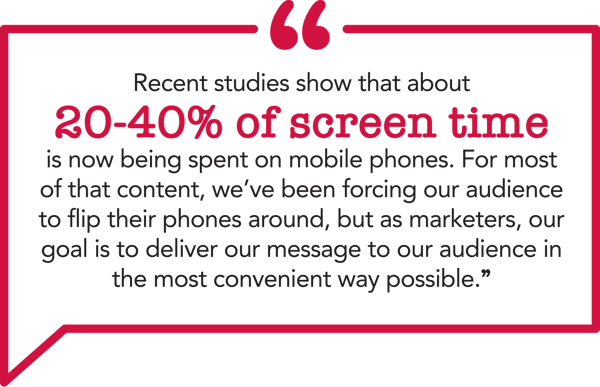 Braden: When you watch a video, it’s normally on a TV, computer monitor or some sort of 16x9 screen that's positioned horizontally. The average American spends about 10 hours a day looking at a screen, so it makes sense that most of the video content we watch is designed to fill up that 16x9 screen.

Recent studies show that about 20 - 40% of screen time is now being spent on mobile phones. For most of that content, we’ve been forcing our audience to flip their phones around, but as marketers, our goal is to deliver our message to our audience in the most convenient way possible. That means cutting out any unnecessary steps—like phone flipping—for potential customers. In comes vertical video!

Annie: At first, there was a bit of resistance to this natural tendency to hold our phones vertically, at least when it came to video content. People who shot video footage vertically were met with eye rolls and publicly shamed (okay, maybe not the second one, but definitely eye rolls.) There was even this fun PSA about “Vertical Video Syndrome" that pleaded for people to stop committing this technical faux pas.

But, times have definitely changed. In marketing, you have to try to meet consumers where they are—and in this case, that’s staring into their phone (while it’s being held vertically). Businesses and advertisers are finally realizing that, and following suit. It’s been a slow evolution, but this type of content is the new norm.


Does the rise of vertical video mean the traditional horizontal format is on its way out? 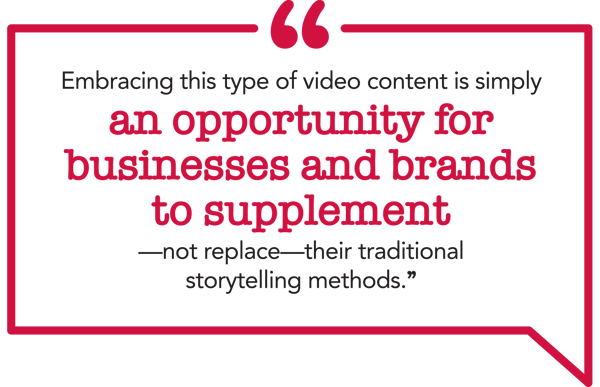 Braden: I’d probably hold off on mounting all the TV’s in your house sideways... That being said, expect more mobile native content to include vertical video. Most of our time is still spent watching videos on normal screens, but as far as mobile goes, more and more of the videos you watch on your phone will be shot vertically.

This goes beyond just Snapchat stories, too. Instagram recently launched a long-form vertical video platform called IGTV and YouTube added support for vertical video on mobile about three years ago. (Jeep ran a vertical ad during the Super Bowl with future YouTube mobile viewers in mind.) It’s also worth mentioning that HQ Trivia has also been a pioneer in vertical video, broadcasting their vertical live game show to around two million players twice a day.

Annie: Traditional video definitely isn't going anywhere. We still spend most of our time looking at those 16X9 screens—our computers, TVs. But as we spend more and more time on our phones, vertical video becomes yet another avenue for the delivery of digital content. Embracing this type of video content is simply an opportunity for businesses and brands to supplement—not replace—their traditional storytelling methods.

For example, vertical video content can offer a more intimate, behind-the-scenes look and feel, which can make a consumer feel more connected to a brand. The point is to understand the varied ways in which people consume content, and adjust the strategies behind our content creation accordingly.

When should I use vertical video, and how can I keep my audience engaged using this format? 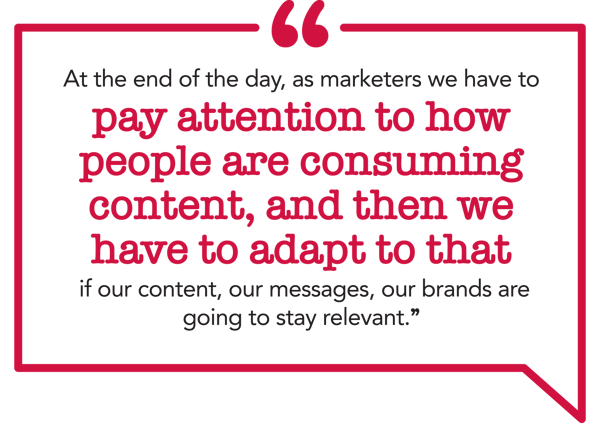 Braden: As with all content marketing, it’s important to know what channels you’ll be using to reach your audience. If you’re trying to reach a mobile audience, a vertical video will probably perform better than one shot traditionally.

Annie: I don't think there's a right or wrong answer for when to use vertical video; but again, it's important to keep in mind how people will ultimately be consuming your content. If you want to create a video that showcases the origin story and growth of your company, a vertical video is probably not the best format for that. But if you want to show consumers a day in the life of an employee, or a behind-the-scenes look at creating a product—that's a story that might be something more suited for vertical video.

Vertical videos, especially on social platforms, come with a unique set of challenges, like a user's ability to click or swipe away to the next thing as soon as they are bored. That means producing content that is visually interesting and will keep people's attention from the moment they see it.  But there are also a lot of new opportunities, like incorporating interactive elements and allowing user's to participate in the content they're consuming.

At the end of the day, as marketers we have to pay attention to how people are consuming content, and then we have to adapt to that if our content, our messages, our brands are going to stay relevant. The verdict is in: vertical is here to stay, and yes, we all better get with the picture.

Still have questions about vertical video, how to shoot it or when to use it? Leave a comment below, or contact us directly to get the conversation started.